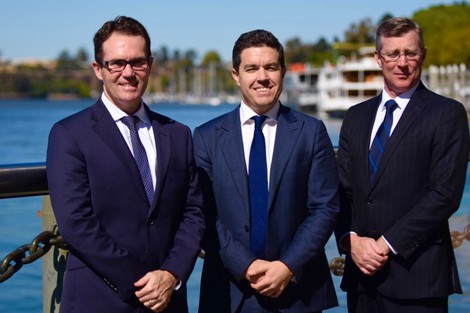 AFTER just four years at Ray White Commercial Queensland director Matthew Fritzsche has been promoted to partner at the leading 30 year old business.

Mr Fritzsche, aged 33,  began his career as a town planner on the Gold Coast before making the transition to property valuation and advisory, then moving into real estate sales.

“Matt has recorded a stellar career ascent. No doubt Matt’s been the business’ top fee writer for the past two years and the recipient of multiple prestigious Ray White Group honours,” Mr Creevey said.

“Tony Williams and I took Matt under our wing and gave him a flying start and he has been good enough to take his opportunity and run with it.  It is incredibly rewarding for both of us to be able to recognise Matt by having him become a partner in the business. “

“One of the greatest attributes of our business structure is that we have a partnership with the White Family meaning we are flexible enough to reward people such as Matt with equity in the business.  The White Family take great pride in rewarding good people and promoting growth so the ability for us to recognise Matt in this way highlights the career pathways that are possible for other talented commercial agents interested in joining the Ray White Commercial Qld business.”

“Given that most of the Commercial businesses are corporately owned and structured it is rare that a high performing agent can have the opportunity of an equity stake in an established business but that is just another way that the Ray White Group is different to the rest of the pack. We aim to create the best environment for our agents in which to thrive,” Mr Williams said.

“We are always on the hunt for good talent as we have pathways in each of our commercial divisions for entrepreneurial stars to shine.”

As a director at Ray White Commercial Queensland within the Special Projects Division, Mr Fritzsche is focused on the sale of residential development sites ranging from unit sites in the city through to larger master planned subdivision sites throughout Queensland and in northern NSW.

“I am so excited about the future and thankful to the White family for this opportunity,” Mr Fritzsche said, who worked with a broad range of clients from private landowners to larger corporate and institutional groups.

Mr Fritzsche has been involved in more than $410 million in completed transactions — that’s more than $100 million a year.

It is led by Tony Williams and Mark Creevey and comprises a team of 30 people that cover all aspects of the Queensland commercial property market.  It is a partnership between Tony Williams, Mark Creevey, Matt  Fritzsche  and the White Family.