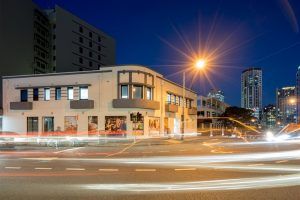 A fully leased 1,333sqm* office and retail building on the edge of Brisbane’s CBD is up for grabs at 215 Wharf Street, located 500m from Brisbane’s golden triangle, with a price tag of $8.5 million.

The three-level building, once home to the much loved St Pauls Tavern, produces an annual net income of $444,959* + GST, with a three year WALE as of June 2021.

Brisbane foodies will be familiar with one of the tenancies, which houses renowned French chef Thierray Galachet’s restaurant, La Cache au Vin.

Other tenancies include a range of office users who enjoy the unique workspace as well as a thriving Asian Supermarket.

Mr Burke said that the sale will provide a rare opportunity to both investors and developers alike.

“The elevated 1,221m²* site provides brilliant views over the Brisbane CBD and surrounding suburbs, and has future development potential with multiple uses up to 25 storeys,” Mr Burke said.

“It’s also within easy walking distance of the entire CBD, and of Central Train Station,” he said.

Mr Morrison said that the immediate surrounding area is already undergoing significant redevelopment, with the Australian Tax Office recently committing to their new headquarters nearby in Wharf St.

“We expect the location to continue to be a major drawcard for buyers,” he said.

The campaign is already underway, with a range of developers and astute investors lining up to inspect the site.